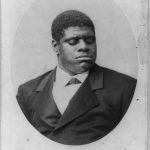 Thomas Wiggins was born blind in 1849 to slaves near Columbus, GA. After the slave owner discovered he was blind, he was denied basic human rights until his mother interceded to save his life. The family was then sold at auction to General James Bethune who had children that were gifted pianists and singers. As the Bethune children practiced their music lessons, Thomas stood by listening and later was able to reproduce exactly the songs practiced. General Bethune, realizing Thomas was a musical prodigy and could be a source of income; began providing him his own piano lessons. “Blind Tom” became his nickname early on. By the age of 9-10; Thomas had a hired manager and was travelling all over including Washington D.C., performing up to four times per day. Invited by U.S. President James Buchanan he became the first African American musician to perform at the White House. He composed several piano and vocal pieces and at the age of 15 wrote the “Battle of Manassas”; inspired by Civil War events. He later met Mark Twain who attended three of his shows as he continued to perform throughout the country and Europe. Also inspired by his music, Elton John composed a song in his honor.

As Thomas grew up, some say he may have had autism spectrum disorder. There were moments he would wring his hands, he lacked emotional development, inhibition and was immersed in music. With his gifted musical abilities he was significantly exploited. Following the Civil War, the Bethune family continued guardianship and control of Thomas’ income that often benefited the family interests and Confederate causes. Thomas lived with the Bethune family until his passing in 1908 from a stroke. Controversy exists on exactly where Thomas is buried; either in New York with the Bethune family or later exhumed and now resting in his birthplace in Georgia.

“Blind Tom” Wiggins is remembered to this day. In 2002, the 7 Stages Theatre in Atlanta, GA produced a play based on his life entitled Hush: Composing Blind Tom Wiggins. A collection of his original music is held at Columbus State University in Georgia and pianist John Davis recorded fourteen of his original pieces.